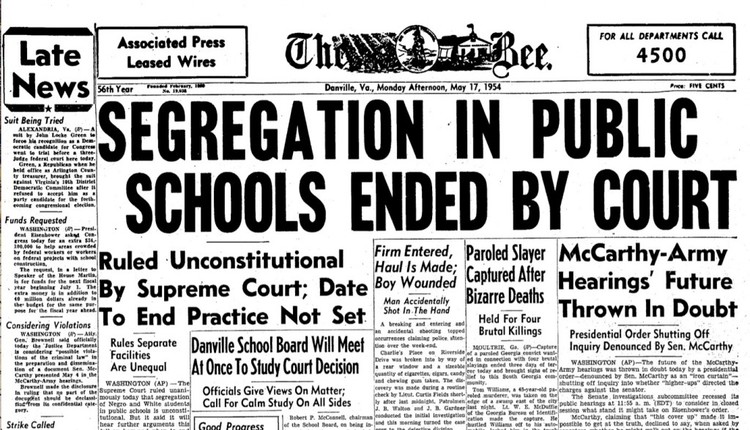 Brown vs. Board, Govt. vs. People: The Curious Course Of The Desegregation Wars

If you're like me, you learned that "segregation" was an unmitigated evil before you were old enough to pronounce the word correctly. A whole generation of us got our first lesson in Constitutional jurisprudence from the early 1970s rock group Three Dog Night—

The ink is black

The page is white

Together we learn to read and write

The child is black

The child is white

The whole world looks upon the sight

And now a child can understand

That this is the law of all the land 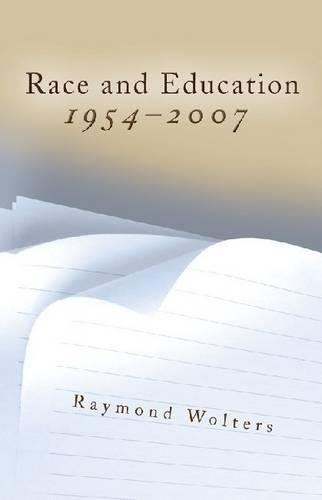 Even sober legal scholars lapse into religious language when dealing with Brown vs. the Board of Education."The justices of the Supreme Court," according to Law Professor Michael J. Perry [Email him]as cited by historian Raymond Wolters in his new book Race and Education 1954-2007, "were modern 'prophets' selected by an 'American Israel' and authorized to strike down laws they deemed mistaken." [The Constitution, the Courts, and Human Rights, 1982]

Others quoted by Wolters liken desegregation's crusaders to Joshua—making walls tumble down and leading people into the Promised Land of American public schools. So sacrosanct has the landmark 1954 Brown vs. Board of Education decision become that no judge can be confirmed for a federal appointment today without paying it lip service.

Even Wolters reassures the average reader with a few conventional phrases: Brown "condemned an entrenched injustice [and] reconciled the nation's official policies with its basic principles". ()But he demonstrates conclusively that the legal reasoning behind the decision was spurious and many of its later outgrowths problematic or negative.

Before deciding the Brown case, the Supreme Court asked the NAACP's lawyers for evidence that the framers of the 14th Amendment had contemplated school desegregation. The Court, it seems, wanted to rule against segregation but feared being accused of the sort of judicial activism which several of the justices had denounced during the years of the New Deal.

The NAACP commissioned historian Alfred H. Kelly, who quickly discovered that the very Congress which submitted the 14th Amendment to the States had itself established segregated schools in the District of Columbia! Kelly later described how he had

"manipulated history…carefully marshalling every scrap of evidence in favor of the desired interpretation and just as carefully doctoring all the evidence to the contrary, either by suppressing it when that seemed plausible, or by distorting it when suppression was not possible." [Clio and the Court: An Illicit Love Affair, by Alfred H. Kelly, Supreme Court Review, 119 (1965)]

Afraid bad history would be insufficient, the NAACP mixed in some bad social science. Black psychologist Kenneth B. Clark reported that nine out of sixteen Black children from segregated schools in South Carolina preferred to play with a white rather than a black doll. Clark did not mention that his study of desegregated black children found the same phenomenon. But citing this crude experiment as "modern authority," the Supreme Court decided that the segregation of Black pupils imposed upon them "a feeling of inferiority… that may affect their hearts and minds in a way unlikely ever to be undone."

In actual fact, segregation had served to spare blacks invidious comparisons with whites. Later studies, reported by Wolters, confirmed that black children in segregated schools had higher self-esteem than those in majority-white schools.

By its appeal to sociology, Brown set a precedent for deciding cases on extralegal grounds. Segregationists, who had at first based their case on eighty years of legal precedent, soon responded with scientific evidence of their own. (Wolters reports that  a reviewer for his publisher, the University of Missouri Press, was so disturbed by the objective tone in which Prof. Wolters recounted these segregationist arguments that he recommended not publishing the book unless the author disavowed them!)

"the differences between the two racial groups in a variety of mental tests are so large, so regular and so persistent under all sorts of conditions that it is almost unthinkable to conclude that they are entirely a matter of environment." [Henry E. Garrett, "Negro- White Differences in Mental Ability in the United States," Scientific Monthly 65, 9 October, 1947]

Wesley Critz George, a distinguished professor of anatomy explained to the court that

the average weight of the brains of Caucasians was about 1,380 grams, that of Negroes about 1,240 grams, with the difference especially pronounced in the prefrontal area where abstract thought occurred.[Wolters, p. 36]

This evidence was powerful enough, Wolters reports, to cause NAACP attorney Constance Motley "to weep audibly in the courtroom." [Race and Reality, by Carleton Putnam, Chapter IV]

Despite having won Brown on the basis of extralegal evidence, the NAACP now did an about-face and tried (unsuccessfully) to get scientific testimony excluded from the case as irrelevant. The presiding judge in Stell v. Savannah ruled in favor of the segregationists. (His ruling was overturned on appeal.)

The quest for "integration" now entered its second phase. For more than a decade after Brown, "desegregation" was not understood to require integration. Well-established residential patterns meant that many schools would continue to be virtually all-white or all-black even without practicing racial discrimination. Desegregation meant merely that a child could not be excluded from the local public school on the grounds of race. But it did not mandate racial mixture in schools.

This distinction between desegregation and integration was made explicitly and repeatedly by the courts, and was written into the Civil Rights Act of 1964. Prof. Wolters considers it both clear and valid. But most legal scholars now disagree; they reject or ignore the distinction and (at least nominally) interpret Brown to require racial mixing. How did this change come about?

After ten years of resistance, the South grudgingly accepted Brown in the wake of the 1964 Civil Rights Act, which tied federal funding to desegregation. Most districts adopted a "freedom of choice" policy, allowing students to attend any school they wished. Typically, this resulted in a few Negro children transferring to previously all-White schools; transfers in the opposite direction were almost unheard of.

However, a significant faction within the Civil Rights movement (and increasingly within the government bureaucracy) was unsatisfied with these modest changes. It would settle for nothing less than full integration. Some were inspired by Equality of Educational Opportunity, a seven-hundred page study produced under the direction of sociologist James S. Coleman and commonly called the "Coleman report." This document, issued in 1966, was interpreted to imply (among other things) that when blacks attended majority white schools, their academic performance improved without the performance of whites declining.

That same year, the federal Office of Education issued a new set of guidelines for enforcing desegregation. The guidelines stated:

"The single most substantial indication as to whether a free-choice plan is actually working is the extent to which Negro or other minority group students have in fact transferred from segregated schools." [United States Commission on Civil Rights, Federal Rights Under School Desegregation Law, June 1966,PDF]

The document went on to specify that a school would not be considered desegregated unless the amount of racial mixing doubled each year until racial balance was achieved! One southern Senator, Richard B. Russell,  described the new guidelines as "fanaticism at its very zenith". Wolters argues that the Office of Education knew perfectly well that it was changing the meaning of the law.

Court challenges quickly followed, with the Fourth Circuit rejecting the guidelines and the Fifth Circuit upholding them. Then, in the case of Green v. New Kent County(1968), the Supreme Court unanimously sided with the Fifth Circuit and ordered southern school districts to assign students by race in order to achieve substantial integration. The court had overturned Brown while claiming to uphold it.

It was in response to the Green decision that a judge in Charlotte, North Carolina imposed a busing program to disperse the races until no school was recognizably black or white. The Supreme Court reviewed the case and upheld the ruling in Swann v. Charlotte-Mecklenburg(1971). The justices specifically endorsed means such as busing and the gerrymandering of school districts to bring about integration. But they also cautioned that such integration was mandated only in order to remedy past segregation, rather than as an end in itself. As a result, the ruling applied mainly to the South.

In Detroit plans were soon afoot to combine the black city districts with fifty-three white suburban districts. The new consolidated school district was so large that some children would have been bused three hours each day.

At this point, finally, the Supreme Court flinched before the monster it had wrought—and possibly "followed the election returns", in the shape of the George Wallace phenomenon and the Nixon presidency. In Milliken v. Bradley (1974), a 5-4 majority voted to reverse and censure the lower courts for having mandated the Detroit integration program.

"Brown had been the watershed of school desegregation. Green, Swann and Keyes represented the high tide for integration. Milliken marked the water's edge."

Integration was a failure. It did nothing to improve the performance of black schoolchildren (as even James S. Coleman came to concede in a 1978 paper noted by Wolters). It wasted untold money and time. It sparked massive white flight. And it created deep resentment among both blacks and whites. Blacks perceived white academic achievement as a form of "showing off" intended to make them feel inferior. The minority of blacks who did keep up with whites got accused of being "sellouts." Whites were put off by black rowdiness, profanity and—sometimes—misconduct toward white girls. Prof. Wolters documents the entire fiasco with a wealth of detail I can only hint at here.

In integration's third phase, which still continues, the Supreme Court in a series of rulings issued between 1991 and 2007 has moved gradually back toward the original understanding of Brown. But by this time, there were fewer whites left in many public school districts for blacks to integrate with anyway—and those remaining were disproportionately poorer and disadvantaged.

Yet judicial meddling in education was only made possible by that great egalitarian reform of a previous era, public schooling. Race in education became a political issue because education itself had long since been politicized by governmental takeover. This might be a matter worth Prof. Wolters' attention in writing his promised next book on the subject of educational reform.

F. Roger Devlin [Email him] is a contributing editor for The Occidental Quarterly and the author of Alexandre Kojeve and the Outcome of Modern Thought.