California lawyer Nicolas C. Vaca got his start as an ethnic activist by listening to Malcolm X lecture at Berkeley in 1963.

But by the end of the 1960s, Vaca had discovered that, in the civil rights struggle, all minorities are equal, but one minority is more equal than others:

"Before arriving in Washington I expected to encounter other Mexican Americans at the [U.S. Commission on Civil Rights], but I discovered that I, a summer intern, was the highest ranking Mexican American there."

Eventually, more Latinos elbowed their way into the lucrative business of being professional minorities. But they found that the dominant blacks weren't willing to allow them places at the table in proportion to their burgeoning numbers.

Vaca became fascinated by how the black-Latino political conflicts that he saw all around him were swept under the rug in the media:

"For years I discussed these issues with close friends and fellow attorneys—Anglo, Latino, and Black—as I waited for a book to appear that would address the conflict or at least go beyond pat analyses like 'Interethnic conflict can exist, but it is believed that there is more of a basis for cooperation than there is for conflict'—and then drop the subject." 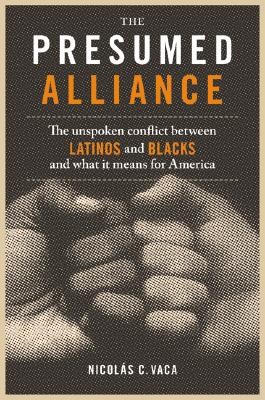 He eventually realized he would have to write the book himself. So he has: The Presumed Alliance: The Unspoken Conflict Between Latinos and Blacks and What It Means for America.

Vaca recounts some fairly well-known tales: for example, how in Los Angeles in 2001, South Central blacks teamed up with San Fernando Valley white conservatives to defeat Antonio Villaraigosa's bid to become the first Mexican mayor since LA was a dusty pueblo. He also gives the once-over to the convoluted story of how Fernando Ferrer's attempt to win the 2001 Democratic mayoral primary in New York City with a Latino-black coalition foundered upon his protracted and frustrating courtship of Al Sharpton.

More interesting are the fresher stories—about how baldly Hispanics in Miami disdain blacks; and how dismissively the black ruling class in Compton, just outside of L.A., treats that suburb's Chicano majority.

As the refuge for Batista Cuba's upper and middle class, Miami has the best-organized, wealthiest (and whitest) Latino community in the U.S. In contrast, it may have the most degraded African-Americans. In both 1982 and 1989, Latin American immigrant policemen shot African-American citizens under suspicious circumstances, triggering major black riots.

Florida blacks with anything on the ball quickly wise up and head for Atlanta, where the white business class is a lot easier to shake down. (Vaca, however, points out that even in Georgia there are expected to be more Hispanics than blacks by 2010.)

As white as Miami's Cuban powerbrokers are, they feel no white guilt whatsoever. After all, they hadn't oppressed American blacks (which is certainly true—before 1959 they had been busy back home oppressing Cuban blacks).

Compton, the spiritual home of West Coast gangsta rap, is notorious for its corrupt and dysfunctional black-run government. Still, a lot of people south of the Border have been down so long that even Compton looks like up to them.

By 2001, 59% of Compton's residents, but only 15% of its voters, were Latino. Chicano activists routinely demand that Compton's black elected officials share power with its voteless illegal aliens. But the African-American leadership responds with ringing endorsements of the sanctity of citizenship that would warm the hearts of VDARE.com readers.

Of course, in the long run, the American-born children of Compton's illegal immigrants will vote their own Latino hacks into the city job sinecures (as recently happened in nearby Lynwood). In the meantime, however, Compton's black political class is getting while the getting's still good.

Few of Vaca's stories are edifying. In some, it's as hard to figure out who morally deserves support as it was during the Iran-Iraq war.

Not surprisingly, most black and brown activists wish Vaca had never written the book. (One longtime ally in the Chicano movement stomped out of the bar when Vaca described the subject of his work, and hasn't talked to him since.) And in fact it wasn't very discreet of Vaca to document for us "gringos" that the modern civil rights movement is just another pork-snorting contest over who can shove the most snouts into the taxpayer-subsidized trough.

Occasionally, though, Vaca's narrative rises above war stories about the tawdry ethnic jostling for taxpayer-supported jobs and discusses legitimate issues. Unlike the economic illiterates at the Wall Street Journal Editorial Page, who proclaim that immigrants do the jobs Americans don't want, lawyer Vaca simply takes it as one of his seven axioms that "Immigrants Will Compete for Unskilled Jobs with African Americans."

In this dispute, Vaca's allegiance lies with his fellow co-ethnics. My loyalties, however, have to rest with my fellow American citizens.

Personally, I am a citizenist. That is not a word you see often (here are all twelve uses of the word known to Google) which is not surprising because few pundits seem to think like this.

My starting point in analyzing policies is: "What is in the best overall interests of the current citizens of the United States?"

In contrast, so many others think in terms of: "What is in the best interest of my: identity group / race / ethnicity / religion / bank account / class / ideology / clique / gender / sexual orientation / party / and/or personal feelings of moral superiority?"

Precisely because basing loyalties upon a legal category defined by our elected representatives is so unnatural, it's the least destructive and most uplifting form of allegiance humanly possible on an effective scale.

The interesting question that Vaca doesn't answer (but I will in a future column) is not: why are blacks and Hispanics competitors for government goodies? (The answer of course: because, like Mt. Everest, they are there). Instead, the interesting question is: why does the African-American political elite disregard the black rank and file's hostility toward immigration?

Nobody ever asked African-Americans if they wanted their nation's ethnic balance rearranged to pry them out of their hard-earned spot as the biggest minority.

So why have their leaders acquiesced in this disastrous social engineering experiment?