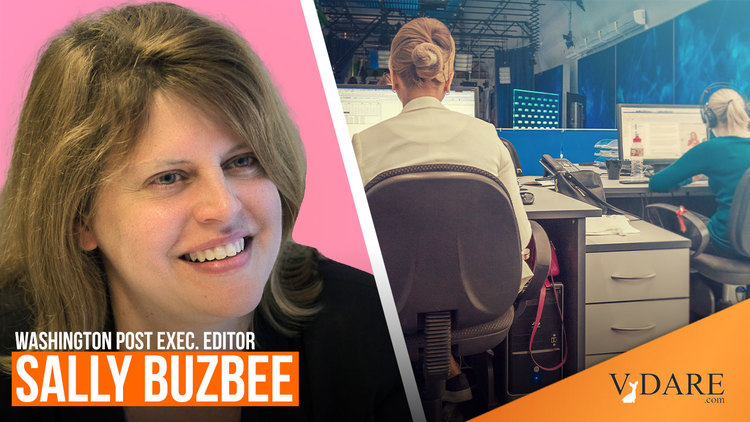 Washington Post journalist Paul Farhi recently put out a very interesting (if embarrassingly fawning) twitter thread on the occasion of Sally Buzbee being named executive editor of the Washington Post a.k.a. his boss:

“Women are now in charge of the newsrooms at the Washington Post, CBS News, ABC News, NPR, MSNBC, Reuters, Financial Times, Guardian and the Economist. The fact that this is not a big deal is kind of a big deal.” 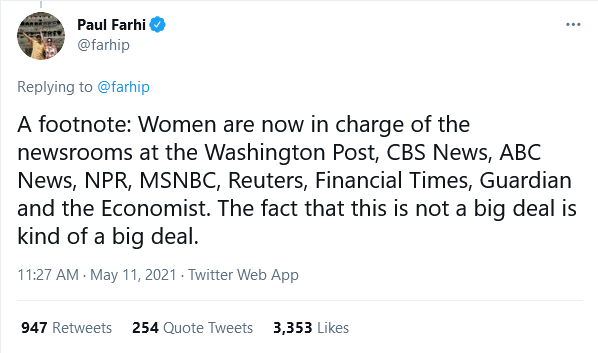 What Farhi presumably meant was that this “fact“ was a wonderful example of growing Equality and Progress. He was virtue-signaling his approval at the collapse of male influence. However, unintentionally, he drew attention to something that is important for very different reasons: women being in charge is indeed “kind of a big deal” because the technical literature suggests it will mean that the news will be reported less objectively, less fairly, less accurately—and that some politicians may come under less scrutiny.

The “extreme male brain” is extremely high in “systematizing.” It is focused on logic, reason, order, hierarchy and with making sense of the world accurately, Autistic-like, it is extremely low in “empathy”—that is, caring about the feelings of others, and being interested in and able to read external signals of internal emotions.

The extreme female brain is exactly the opposite. It is low in systematizing and high in “empathy.” The result is females are far more interested in equality, making sure nobody gets hurt, and in the feelings of others [The extreme male brain theory of autism, by Simon Baron-Cohen, Trends in Cognitive Sciences, 2002].

In other words, women are less interested in the objective truth, less logical, and more willing to put ideals like “equality” above the truth. Taken to an extreme, “hyper-empathy” means that you over-read social signals, leading you to be paranoid about people’s motives [Mentalism and mechanism, by C. Badcock, Human Nature And Social Values, 2003].

This is made even worse by the fact that women are more neurotic than men: they experience negative feelings more strongly (A good source is Personality: What Makes You the Way You Are, by Daniel Nettle). This makes them much likely to feel “unsafe”—to use a current Leftist buzzword. (Witness this ridiculous headline The Memo: Lawmakers on edge after Greene's spat with Ocasio-Cortez, by Niall Stanage, May 15, 2021.)

NEW: The Memo: Lawmakers on edge after Greene's spat with Ocasio-Cortez https://t.co/vbWyx2b4bl pic.twitter.com/duSYF7tWxr

This makes them prone to put “safety” over “freedom” and indeed “truth.” And, as Simon Baron-Cohen noted, they are simply far more conformist, desiring to fit in with the crowd and keep everyone happy.

Today, if you hadn’t noticed, the crowd is Woke Progressives.

In earlier VDARE.com articles, I have noted that the female presence tends to corrupt the jury system, because females will be more swayed by emotional arguments—especially about others being harmed—rather than by logical presentations. And they may assume malevolent motives based on over-empathizing.

I have also argued that women may be destroying academia by putting equality and Everyone Getting Along ahead of truth, by being unable to rationally deal with academic disputation (being Neurotic they are more easily upset and overwhelmed by negative feelings), and by driving geniuses—who tend to be male outlier high IQ autistics obsessed with truth and thus abrasive—out of the university system.

In fact, when my VDARE.com article about women in academe was tweeted about by Prof. Eric Rasmusen, a male academic at the University of Indiana, it resulted in calls, by women, for him to be fired, and in his female provost Lauren Robel  [Email her] engaging in the exactly the emotion-fest we’d expect: she claimed his comments were “lethal” for women academics and his empirically-accurate views were “hurtful” [Our Professor’s Views Are Vile, University Says. But We Can’t Fire Him, by Nicholas Bogel-Burroughs, New York Times, November 22, 2019].

So imagine the damage that could be inflicted on the pursuit of truth as females take over influential newsrooms.

Well, we don’t have to imagine, because it’s already been researched. A female-dominated newsroom is going to tip towards female concerns. Research by the Pew Research Center has unearthed exactly what these are. Being higher in Neuroticism, women are more interested in news stories about natural disasters, health and safety issues and in “tabloid news”—in other words, “celebrity gossip.” In contrast, men, being highly competitive and status-driven, are far more interested in “international affairs, Washington news and sports” [Where Men and Women Differ in Following the News, by Tom Rosentiel, Pew Research Center, February 6, 2008].

More evidence that female-dominated newsrooms are far more interested in these “female” issues and focus on them in reporting: Women Matter in Newsrooms: How Power and Critical Mass Relate to the Coverage of the HPV Vaccine, by Theresa Correa & Dustin Harp, Journalism and Mass Communication Quarterly, 2011.

In other words, we would expect female-dominated new rooms to be, essentially, less interested in politics, less likely to hold our leaders to account—because women are more conformist and submissive to authority—and less likely to tell us about crucial international issues. See Sex Differences in Conformity: Status and Gender Role Interpretations, by Alice H. Eagly and Carole Chrvala, Psychology of Women Quarterly, September 1, 1986.

Indeed, because they dislike conflict and desire social accord, we would expect women interviewers to be far less cutting and incisive in their cross-examination of politicians, permitting them to get away with more.

And we would be right. It has been documented that female interviewers are far less confrontational and cutting in their style [Roles and Identities in Confrontational Interactions, by Elda Weizman, Questions de Communication, 2006].

Returning to the Pew Research Center study, if women’s attitudes dominated the news in 2007 when the research was done, we would have heard far more about tornadoes, floods and the recall of toys from China. But, crucially, we would have learned far less about “US/Iran tensions,” the condition of the US economy and (Pew says) “the issue of immigration.”

But we would also have heard less about “the Superbowl”!

So to those of us who aren’t sports fans, there may be some benefit to female influence on the newsroom!

But, clearly, too much female influence is going to leave us ignorant of important national issues.

And, to make matters worse, where they are reported we can expect a Pravda-like enforcement system, where conformist ideals—such the promotion of equality and of not upsetting people—are placed above reporting and getting to the objective truth.

The possible only silver lining, remarkably: here is evidence that female reporters are inclined to rely on male expert sources—sources that are likely to be more logical and appointed on merit—slightly more than do male reporters [Women in TV Broadcast News: Reporters and Sources in Hard News Stories, by Mariah Irvin, Elon Journal of Undergraduate Research in Communications, 2013].

However, with women editors in charge of newsrooms, this will increasingly be for “soft news” stories.

That’s kind of the understatement of the decade.