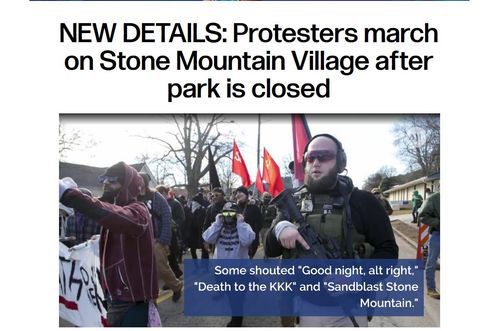 Antifa Violence Shows Anarcho-Tyranny Is Spreading. When Will Trump Stop It?

See also Krugman Wrong, Again—2017 Saw “Emergence,” Not Of “Resistance,” But Of An American Totalitarian Left

It’s not even surprising anymore. In opposition to a rumored “Ku Klux Klan” rally at Stone Mountain GA, an armed column of masked Antifa waving communist banners marched through the streets this weekend. They contemptuously ignored anti-mask laws and the lack of a permit. But police didn’t interfere. [Watch: Activists burn Klansman effigy at ‘victory march’ after white nationalists don’t show up to Georgia rally, by Martin Cizmar, Raw Story, February 2, 2019]

In fact, whether the “Klansmen” or “white nationalists” even existed is unclear—Main Stream Media outlets are not identifying the group that wanted to host the rally, which seems as elusive as those Chicago “MAGA Country” enthusiasts who supposedly attacked Jussie Smollett. But it doesn’t really matter, as a cheerleading Huffington Post article noted that the state had denied the group a permit and shut down the park to prevent a rally anyway. [Counterprotesters burn Klansmen in effigy as Georgia White Supremacist Rally Fizzles, by Mary Papenfuss, February 3, 2019]

However, while the “Klan” didn’t show, complying with the law, Antifa did. Thus it wasn’t really an Antifa “counterprotest” at all—simply an armed march by communists (note the flags) that Georgia authorities benevolently smiled upon.

As in Charlottesville 2017, the issue is not about the ideology of “Klansmen” or “Antifa.” It is not even about MSM bias, though Journofa shilling for Communist militants is outrageous. The issue is: does an impartial Rule Of Law really exist in America anymore—or is the country is now fully under the selective law of anarcho-tyranny?

After all, it’s clear that U.S. law enforcement has a hands-off policy towards Antifa, despite a number of disturbing incidents in recent weeks.

Landeros had a longtime history of radicalism, including posting comments such as “time to start killing pigs,” but the FBI had declined to bring charges against him. [Incendiary devices found outside Eugene police HQ after police shooting of armed Antifa radical, by Debra Heine, PJ Media, January 30, 2019] After the shooting, “multiple incendiary devices” were found outside the Eugene police department. [Multiple incendiary devices left outside Oregon police department by unknown attacker, by Mike Ciandella, The Blaze, January 31, 2019] No direct link has been established as yet, but given Antifa’s open hatred of police, it’s certainly a starting point for any investigation.

According to the testimony given by the Marines, Keenan asked them if they were “Proud Boys”—a reference the Marines did not understand. They were thereupon set upon by a mob that allegedly screamed “f**k them up.”

This account suggests another danger of allowing Antifa mobs to roam the streets looking for enemies—they have the habit of attacking any other random people who get in their way, including minorities and even journalists.

Of course, if Massey did participate in the attack, it’s not surprising—given that the government essentially released those who marred the inauguration of the Commander-in-Chief with riots, why wouldn’t he keep doing it?

Alcoff was well-connected in Establishment Democratic politics, despite (or because of) which his arrest has been almost unmentioned in the national MSM. [DC Antifa leader arrested for multiple violent felonies out of a job at progressive nonprofit after his radical ideology was exposed, by Andrew Kerr, Daily Kerry, January 29, 2019]

This leads to the larger point—why does law enforcement only act if journalists do the work for them? It should not be up to The Daily Caller to investigate an organization that has criminality as its raison d'être.

Even worse, the Daily Caller’s investigation is the exception that proves the rule. All too significantly, Antifa enjoy freedom from any pushback by the corporate or governmental power structures they claim to oppose. These supposed radicals enjoy overwhelming support from MSM, complete access to fundraising, financial services, and social media, and the indulgence of law enforcement—including from President Trump’s Department of Justice.

In contrast, the Trump Justice Department has been very eager to persecute its own supporters, even using Antifa as intelligence sources in court documents.

A typical College Republican has experienced more “oppression” at the hands of the System than these communist radicals. Would have been any law enforcement action at all if the Marines assaulted in Philadelphia were whites, rather than members of a protected class?

All of this ultimately comes from the same source—the unwillingness of the conservative Establishment, and Republicans generally, to enforce the law and to condemn Democrats’ failure to do so.

Thus, despite an independent report confirming massive failures by state and local governments in Charlottesville in 2017, there has been no investigation by the federal government. Instead, the Department of Justice appears to be busy trying to take down the president himself: the Administration is all but paralyzed by an endless, unlimited investigation marred by official misconduct but cheered on by anti-Trump journalists.  [Inside DOJ and FBI: Anatomy of a bloodless coup?, by Francey Hakes,  The Hill, February 1, 2019]

Above all, the massive failure represented by tens of millions of illegal aliens occupying American soil. Illegality on this scale suggests that the “Rule Of Law” is already a fiction. The applause of the MSM is far more important than adherence to any objective legal code.

At the upcoming State of the Union, an illegal alien who formerly worked for President Trump’s National Gulf Club will reportedly be present. [Second Democrat invites former illegal immigrant who worked for Trump to State of the Union, by Lukas Mikelionis, Fox News, February 2, 2019] This display of subversion is of a type that emboldens the Antifa violence Americans now witnessed in the streets.

President Trump should make a stand by having immigration authorities arrest and deport this criminal.

What’s more, he needs to start launching investigations of his own to crack down on nationwide Antifa violence.

For decades, Establishment conservatives have allowed law enforcement to run on autopilot. It’s time to provide some direction and leadership, as the Constitution mandates.

It’s absurd that, although Donald Trump is in the White House, a mob of Antifa is still more representative of the real power in this country than the president himself.