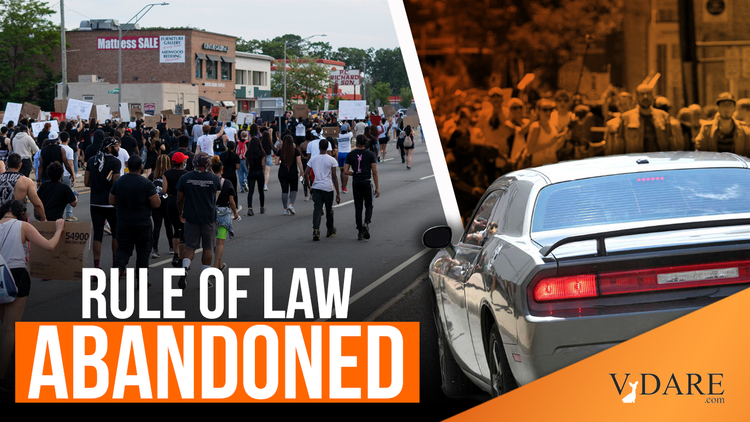 Antifa Thinks Charlottesville 2017 Gave It The Right To Block Roads. It’s Wrong. So What Is Trump Waiting For?

The entire country has become Charlottesville 2017, as police decline to prevent BLM “protestors” from blocking roads and confronting drivers. Some drivers who didn’t want to become the next Reginald Denny have driven on and “protesters” (and their JournoFa friends) then pretend to be helpless victims a la Heather Heyer. This all stems from the same source – the refusal of the federal government to exercise sovereignty over its territory. Yet case law from the Civil Rights era indicates that it has the right and duty to protect travelers on the roads. So what is Trump waiting for?

Though Republicans may not like to remember it, several state legislators had proposed bills to protect drivers who run over protesters blocking the roads before Unite The Right 2017 [These states have introduced bills to protect drivers who run over protesters, by Dakin And one, CNN, August 19, 2017]. Bill Hicks used to joke about it; Glenn Reynolds defended it [‘Instapundit’ Glenn Reynolds defends ‘Run them down’ tweet during Charlotte unrest, by Erik Wemple, Washington Post, September 22, 2016]. There was an understanding that occupying roads is inherently dangerous and surrounding cars is an implied threat.

But during the Democrat mugging of the 2017 Charlottesville Unite The Right rally, where an independent report found state and local authorities deliberately facilitated a riot in order to break up a legal protest, a school resource officer, armed only with pepper spray, left her post, thus ensuring that there was no law enforcement presence when Heather Heyer was killed after James Fields was confronted by armed protesters and drove into a crowd. Fields was sentenced to an incredible 419 years in prison.

Thus, the precedent was apparently set. Even in a “state of emergency,” Leftist protesters (some armed), can occupy streets, set up roadblocks, and confront drivers in the knowledge that drivers could face catastrophic legal consequences if they try to drive away.

Not surprisingly, this has now happened repeatedly during the Black Lives Matter “protests.”

This last case excited the national MSM—except there was no martyr. In Portland, they finally got one. Twenty-four year old Summer Taylor was killed after being part of a group that was dancing and blocking I-5, ostensibly to protest racism and sexism [Summer Taylor remembered, Capitol Hill Seattle Blog, July 6, 2020]. Taylor would have been a perfect martyr for the cause…except the killer was Eritrean immigrant Dawit Kelete, so Taylor’s last act on Earth was to put another black man in jail. The MSM got around this awkwardness by focusing on the car, rather than who drove it.

A 27-year-old man drove a white Jaguar onto a closed freeway in Seattle early Saturday and barreled through a panicked crowd of protesters, critically injuring two women, officials said. https://t.co/9GBOMHhP3v

A young protester has died from injuries she suffered when a luxury car plowed into her and another woman during a Black Lives Matter protest Saturday on a Seattle freeway that has been shut down for days due to the civil unrest, police said. https://t.co/4VN3VeDMcK

Just two days ago, demonstrators in Austin, Texas blocked a road and reportedly began hitting the driver’s car. Garrett Foster then approached the driver’s side window carrying an AK-47. He was shot and killed [What we know so far about the investigation into the deadly shooting at an Austin protest, by Alyssa Goard, KXAN, July 27, 2020]. The late Mr. Foster’s claim that “the people who actually hate us and, you know, want to say s### to us are too big of a [sic] p***ies to stop and actually do anything about it” has been widely circulated.

However, the buried lede in this footage is his comment at the beginning that protesters were supposedly banned from being in the road. Obviously, this system must have broken down because protesters clearly were occupying the streets.

It appears Mr. Foster was armed as he approached the car, though it is not clear that he was pointing it at the driver.

Finally, we have the case of Samuel Young, a man who allegedly fired several shots last Saturday at a Jeep driving through a crowd of protesters. The Jeep didn’t hit anyone. Mr. Young has been charged with attempted murder [Samuel Young, Alleged Shooter During Elijah McClain Protest, Faces Attempted Murder Charges, by Jacqueline Quynh, CBS 4, July 28, 2020]

It's not surprising this is happening. It’s surprising that it’s not happening more and that there haven’t been more casualties. Armed Antifa want to be heroes by “protecting” crowds from cars, even though the crowds shouldn’t be in the roads to begin with. Protesters know that if they occupy the roads, police won’t remove them, lest they receive heavy MSM/Dem criticism.

Consider Attorney General William Barr’s appearance before Congress today, in which Jerrold Nadler and other Democrats tried to shame Barr for the Trump Administration’s attempts to quell violence in Portland and other cities [‘Shame On You!’: Nadler Scolds Barr, Accuses Him of Using Federal Law Enforcement To Prop Up Trump Campaign, by Virginia Kruta, Daily Caller, July 28, 2020].

In fact, of course, the Trump Administration has been far, far too timid. The federal government could invoke the same constitutional justification for the Civil Rights Act of 1964 to directly use federal officers to ensure the freedom of Americans to use the roads.

If this principle permits federal intervention against a motel because the business partially depends on interstates, obviously it would justify federal action to prevent obstruction on the interstates themselves.

The larger problem: we now have an entirely unequal system of law in this country. The MSM/ Dem wailing about freedom of speech in Portland was nowhere to be found when it came to Charlottesville. Indeed, they’ve been urging censorship of entirely peaceful speech online. [Censorship by billionaires, applauded by the left, by  Tom Slater, Spiked, July 2020]

So now we’ve gotten to the point where normal Americans can be essentially held hostage by far-Left radicals every time they go onto the roads. Just as the federal government has forfeited its basic responsibility to protect our borders, it has failed to guard our most basic infrastructure.

“Who’s going to take care of the roads?” opponents used to ask me during my libertarian days. Apparently, no one. Instead of taxes being “the price we pay for a civilized society,” it’s the Danegeld we pay to savages and sociopaths who are destroying the things better men built.

The Social Contract has been definitively broken. The Historic American Nation, which is paying the bills to keep this failed experiment limping along, needs to demand strong action from our supposed nationalist president.

If that doesn’t happen—well, maybe peaceful divorce is indeed the best alternative.