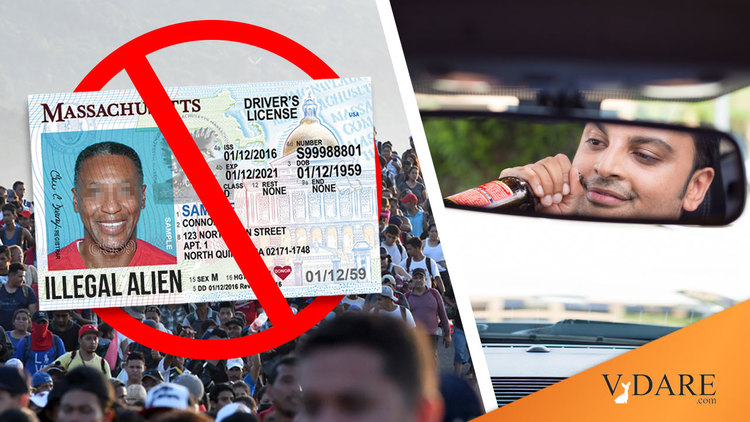 Immigration Patriots might soon earn a victory over the political Establishment in Massachusetts, one of the Bluest states in America. Led by Republican state committeewoman and Angel Mom Maureen Maloney, a group called Fair and Secure MA is gathering signatures to put a “veto referendum” on November’s ballot to stop illegal aliens from getting driver’s licenses [Ballot battle over immigrant licenses gets underway, by Christian Wade, Eagle-Tribune, June 28, 2022]. There’s precedent: a similar grass-roots revolt  passed Ron Unz’s English-only ballot measure with more than 61 percent of the vote in 2002, incidentally elevating Mitt Romney to the governor’s mansion. (Not that he learned anything, but still…) 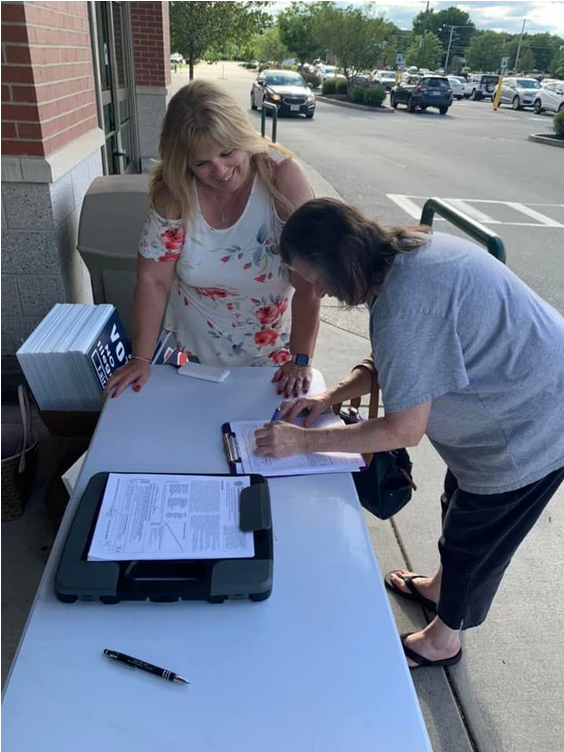 The group needs 40,000 signatures, due to election officials by August 24, to overturn a bill the Massachusetts General Court, the Bay State’s legislature, passed in early June to put illegals behind the wheel. (The group has a list of places where residents can physically sign.) The bill passed over liberal GOP governor Charlie Baker’s veto. Even a handful of Democrats opposed the idea [With Senate override vote, driver‘s license bill becomes law, by Steve LeBlanc, Associated Press, June 10, 2022]. If Fair and Secure can’t prevail in the referendum, illegals will begin driving on July 1, 2023.

Proponents of providing illegals with driver‘s licenses make a few arguments in favor of the policy. They argue that it would make it easier for illegals to get to work, result in fewer hit-and-run accidents, encourage more illegals to get car insurance and raise revenue for the state because of licensing and registration fees [Sheriffs and district attorneys offer support for driver’s license bill, by Aryan Rai, Daily Hampshire Gazette, April 14, 2022].

The referendum question will ask Bay Staters if they want illegal aliens to be eligible for driver’s licenses. A Yes vote means they support what the legislature did, and a No vote means they want to repeal the law. It’s a smart idea and a chance to foster immigration patriotism among people in a state dominated by white Leftists.

Maureen Maloney is a great pick to lead the crusade. Tragically, a drunk-driving illegal killed her son in 2011 [Family of motorcyclist who died is ‘broken-hearted,’ by Brian Benson, MetroWest Daily News, August 23, 2011]. The Leftist Mainstream Media is forced to acknowledge her, and why she’s so passionate about the issue.

As well, the referendum makes immigration an issue in every race across the state. In Massachusetts, that often doesn’t happen. Now, patriot candidates can discuss the downsides of illegal immigration—many of which also apply to legal immigration.

A key point Maloney can make: Every single crime involving an illegal alien, not least drunk driving, is preventable by keeping them out of the country, and deporting those who are here.

Angel Mom Maureen Maloney shows a picture of her lost son, who was killed by drunk illegal alien behind the wheel. Her tale breaks my heart every time I hear it. pic.twitter.com/J7o1uJTIhG

The Biden Regime’s record of the last year shows that federal authorities have little idea who crosses the border illegally…at least unless the Border Patrol catches them. This includes awful criminals who committed heinous acts in their home countries. Immigration and Customs Enforcement recently deported a child rapist from Somerville, Massachusetts to Brazil [Illegal immigrant child rapist busted in Somerville, by Joe Dwinell, Boston Herald, May 31, 2022]. In 2020, ICE deported an Irish Republican Army terrorist who bombed a police station in the 1990s [IRA terrorist behind 1993 bombing of police station near Belfast deported from Boston, by Justin Vallejo, Independent, July 24, 2020]. Outside the Bay State, an illegal alien was arrested for raping a 10-year-old in Ohio. There’s no shortage of horrible crimes committed by illegals to convince fence-sitting centrists that this is a bad idea.

Giving illegal aliens driver’s licenses is an open invitation to document fraud. The state’s Registry of Motor Vehicles is notoriously and woefully inefficient and prone to mistakes. In the Brockton area alone, from April 2018 to February 2022 the agency issued 2,100 driver’s licenses to people who had never taken a road test  [Over 2,000 Brockton-Area Drivers Given Licenses Without a Test, by Kate Robinson, WBSM, February 17, 2022].

But now these Leftist politicians claim the RMV can verify documents correctly from about two hundred countries. Many will be in languages other than English, and some don’t use the Latin alphabet. And given that the U.S. doesn’t have normalized relations with all countries, surely we can’t expect an Affirmative-Action hire to determine whether a national health insurance card from Uzbekistan, or a National ID card from North Korea, is valid. Thus the bill makes it easier for illegal-alien criminals to assume a fake identity.

Worse, the gaffe-prone RMV automatically registers people to vote in Massachusetts unless they check a box saying otherwise [Mass. governor signs automatic voter registration bill into law, by John Bowden, The Hill, August 09, 2018]. It’s not hard to imagine RMV registering illegals to vote, and some of them doing so.

The Leftists who back licenses for illegals assume, by the way, that we New Englanders actually want them here, even though offering incentives to illegals who don’t want to speak the language of or assimilate into our country harms everyone. They are making the places we’ve spent our whole lives in seem unrecognizable. Diversity fractures social cohesion, which a country needs for its citizens to live in peace. Many illegals work under the table for sub-minimum wage, increasing the labor pool of low-wage earners (taking jobs from and depressing wages for natives). They pay little in taxes and have high welfare usage rates, which burdens taxpayers. In Massachusetts, that burden is about $2 billion per year [Massachusetts illegal immigrant population spikes, increase since ’07 leads nation, by Rick Sobey, Boston Herald, June 12, 2019].

A smart politician would run on cutting that spending and instead say they’ll use the money to offer a tax cut to the middle class.

Wages look a lot better for local workers on Cape Cod this summer because the number of foreign workers has collapsed which, with a low unemployment rate nationwide, caused a labor shortage, boosting wages exactly as George Borjas has long predicted https://t.co/A7wNlBNyxx

And, ironically, the driver’s license bill implies that Leftist politicians support increased carbon emissions. Immigration raises emissions globally because people go from lower-emitting Third World economies to higher-emitting (but more productive) First World economies like the U.S. The average immigrant emits four times the carbon here that he would in his home country. Putting illegals from Third World countries such as Haiti and Guatemala in cars will not only worsen that problem but also increase traffic and demand for gas, increasing upward pressure on gas prices.

Good thing is, polls suggest that the repeal referendum, assuming it makes the ballot, will pass. A June UMass Amherst poll found that 46 percent of Bay Staters oppose driver’s licenses for illegals; just 40 percent support the idea. It’s not hard to believe that more people, even in Leftist Massachusetts, oppose the ballot measure. Nationally, 72 percent of Americans polled oppose driver’s licenses for illegals, a Harvard-Harris survey showed in 2019.

One important sign that the referendum might pass: Leftists and Democrats don’t want it on the ballot. Some, such as Leftist state senator Jamie Eldridge and Waltham city councilor Jonathan Paz, have spent hours outside local shops trying to convince people not to sign the ballot petitions [Leftist mobs out in force harassing signature collectors, intimidating potential signers, by Evan Lips, Massachusetts Republican Party, July 11, 2022].

If this were some fringe, right-wing idea with no chance of passing—like abolishing income tax for millionaires—these people wouldn’t care so much because voters would overwhelmingly reject it.

I think my fellow Bay Staters will vote No on illegal alien driver’s licenses—if they get the chance. Of course, this one ballot initiative won’t change the country’s direction. But at least it’s an opportunity to feed some Red Pills to the voters in a deep Blue state.

And maybe this time some politicians will notice.

Hank Johnson [Email him] is a student of New England politics and popular culture.