As soon as the story broke about the Somali cop fatally shooting the pretty white Australian girl in Minneapolis, one of my Muslim fans emailed me a story:

"Re: Hunting in Kuwait as explanation why this Noor guy shot through the car

"I remember being in Kuwait with the president of the investment bank I worked for. We were invited by one of our directors to hunt turtle doves. There were five of us in all and each had a 12-gauge shotgun.

"Instructions were: Only shoot straight and up; shotgun point in air resting on shoulders when not being used. That's it. I was on the far left, and the fellow on the other end was a Syrian.

"Well, we were out there and no straggling turtle doves were migrating. A half-hour later, not one shot was fired. Then, two birds from a tree ahead darted out, between me and the houses on my left.

"We all looked, but the Syrian turned toward us and began shooting over our heads at the birds. The rest of us hit the ground. Even though our host took his gun away, I gave them mine and went back because, if there is a way to overreact, the Syrian would think it is natural and can't even consider the consequences.

"You cannot place these people in a position of authority (for example with a gun in their hands). They will always shoot as a default reaction to anything that is instant. Neither training nor thinking can change their natures.

Since then, we've found out that this is exactly why Officer Mohamed Noor shot the gentle yoga instructor walking toward the police car. He heard a loud noise—or as Powerline blog is calling it, "The Loud Noise Heard 'Round the World." 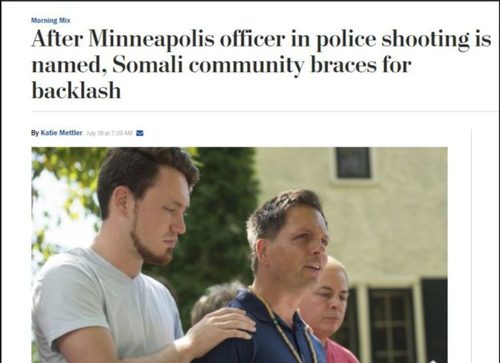 Noor shot from the passenger seat, killing Justine Damond, according to his partner, sitting at the wheel, who is presumably now deaf. Damond had called 911 to report what sounded like a rape in the alley behind her house, and was approaching the responding police car when she was shot.

As usually happens when Muslims attack, the press is consumed with worry about their mental state and well-being.

There are nearly 2 billion Muslims in the world, amounting to a quarter of the world's population, controlling 50 countries. The English-speaking world is about a fifth that size and constitutes a dwindling majority in about a half-dozen countries. But, somehow, no matter how the story is written, Muslims always get to play the victim, and Anglo-Saxons are cast as the aggressors. 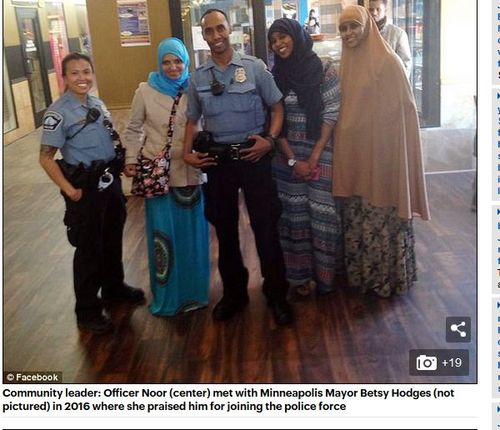 That's why a Somali cop's fatal shooting of a pajama-clad Good Samaritan has gone directly into the "Be Nice to Muslims!" file, rather than the "Why Are All These Somalis Here?" file. (Answer: Because of an earlier mistake with excessive Scandinavian immigration.)

I can't help noticing that it was precisely the "Be Nice to Muslims!" dictate that put this Somali nincompoop on the police force in the first place.

Among Noor's evident errors the night he killed Justine:

1) Shooting from the passenger seat, the bullet whizzing inches past his partner's face, through the driver's side window;

2) Not turning his bodycam on when responding to a 911 call;

3) Shooting to kill because he heard a loud noise;

4) Believing that white women in America pose a threat to a policeman.

A few of the Weather Underground ladies were accomplices to cop-killings, 40 years ago, but even they weren't lone white women cop-killers.

According to the Bureau of Justice Statistics, women of any race committed about 10 percent of all murders from 1980 to 2008, and black people committed a majority of all murders. Other than a small child, it's difficult to think of a demographic that poses less of a threat to a policeman in America than a 40-year-old white woman. 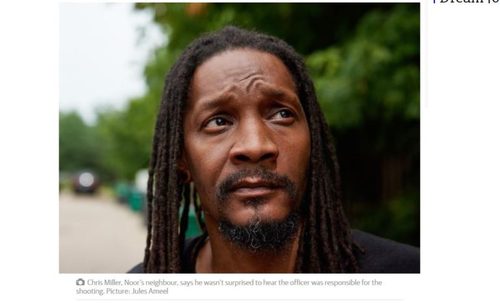 Noor's African-American neighbor, Chris Miller, said he was shocked when he heard about Damond's shooting—until he found out it was Noor. Miller told The Daily Telegraph (Australia) that his Somali neighbor was quick to anger and was always going off on women and children. "He is extremely nervous," Miller said, "a little jumpy ... he doesn't really respect women, the least thing you say to him can set him off."

Sounds perfect for a police officer!

May we see Officer Noor's cadet exam? His training reports? Does anyone believe there is the slightest possibility that Noor was not rushed through the Police Academy so that the nice people of Minneapolis could feel good about themselves for having a real Somali on the police force?

Minnesota's importation of these stone-age people is a completely self-inflicted wound. It's as if the state decided to inject itself with Hepatitis C. Hey, you know what? We're too white and pure. Everyone tie a vein off and give yourself a shot of hep C. We could learn from that!

With Somalis, you get all the social pathologies of Muslims and the American underclass rolled into one package. There's the terrorism and pederasty—but also the criminality and joblessness!

At least with taxpayer-draining Mexican illegals, you can say, yes, but they provide the rich with such cheap labor! Someone, somewhere in America, gets a benefit. There is absolutely no benefit to the more than 100,000 Somalis brought in by Minnesota, except to feed the Scandinavian ethnomasochism, expressed as arrogant self-regard.