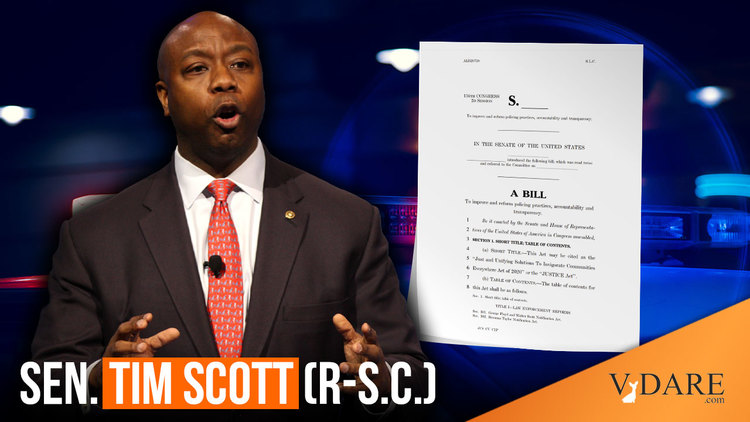 QUESTION: “Who will loads of Republicans support for president in 2024?”

I know this because … I am Carnac the Magnificent!

Also because Republicans have latched onto a black candidate for president every four years, pretty much throughout my entire adult life.

I’m one of those Republicans, having enthusiastically supported Alan Keyes in at least one of his three presidential runs, Herman Cain in 2012 (9-9-9!) and Ben Carson, as my backup to Trump, in 2016.

Other black Republicans who were—in the words of Michael Kinsley—“drooled over” by the GOP include Colin Powell (the Weekly Standard’s choice for the 1996 contest), Condoleezza Rice (supported by Dick Morris and Rush Limbaugh as our 2008 nominee), and Allen West (Glenn Beck’s choice in 2012).

The rational reason for this is that no black person in modern America casually rolls into being a Republican. I never really gave it much thought, but all my friends and family are Republicans, so I guess I am, too.

That doesn’t happen. By the time any black person decides to announce to the world that he’s a Republican, a lot of thought has gone into it. There will be no hagiographic profiles in the New York Times, Pulitzer Prizes or hosting gigs on MSNBC.

That’s why black Republicans, on average, are a lot ballsier than white Republicans (and 147% smarter than black Democrats).

But there’s also a ridiculous reason Republicans make goo-goo eyes at any black Republican. As the Social Justice Warriors say, they’ve “internalized their oppression.” Oh, you call us “racist,” media? We support (Fill in Name of Black Republican Here)! What do you say now, media?

Even Sen. Scott has internalized his oppression, acting as if he has to constantly prove that he’s not “racist” and that he’s really black.

Sen. Scott’s big cause—and, indeed, about the only congressional legislation being discussed other than President Biden’s spectacular list of free goodies—is a bill to reform policing. And not a sane “reform,” like putting more officers on the street. Oh no, Scott’s bill, this year and last, is premised on the loony belief of Black Lives Matter that cops are too aggressive and desperately in need of more supervision.

This has succeeded primarily in giving liberals yet another basis for attacking Republicans, sneering, as Vox put it, that Scott has the “unenviable task” of “talking to … Republicans” about race and policing.

Last year, Scott promoted his “Justice Act” with an op-ed in USA Today that opened with this:

“At the age of 21, I was pulled over for simply having an improper headlight, and yet the officer felt the need to place his hand on his weapon and call me ‘boy.’ Even today, while I have the privilege of serving as a United States senator, I am not immune to being stopped while driving at home in South Carolina or even while walking onto the grounds of the Capitol.”

I’VE NEVER HEARD ABOUT BLACK MEN BEING STOPPED BY THE POLICE! Who knew? Except anyone not in a coma for the past 20 years.

I don’t doubt that it’s awful to be perceived as a possible criminal by the police. But there are worse things. Like being killed.

Thanks to the anti-police BLM movement, the year after Michael Brown was shot in Ferguson, Missouri, the murder rate spiked 12.1%—the greatest year-to-year increase since 1968.

After BLM exploded last year in response to Saint George’s martyrdom in Minneapolis, the 2020 gun murder rate shot up by an astonishing 31% compared to 2019. It was the biggest year-to-year increase in history. And consider that the murders in honor of George Floyd didn’t even begin until sometime after May 25 last year.

The majority of those doing both the murdering and the dying were black. (As I’ve often pointed out, in addition to everything else, criminals are lazy. They might prefer to commit crimes against other ethnic groups, but don’t want to leave their neighborhoods.)

Just two weeks ago in Chicago, a 7-year-old girl was fatally shot as she sat in a McDonald’s drive-thru line with her father. Some would say that’s even worse than Sen. Scott being stopped by the police.

Wouldn’t a great cause for any U.S. senator—especially a black senator—be to oppose the effectively pro-criminal, aggressively anti-police BLM, instead of catering to them?