The Democrats have two very different profiles. One is their public face of absolute moral purity. They're just better people than Republicans.

That's what you're buying when you walk into the Democratic store: pure virtue. They've got nothing else on the shelves. No beef jerky, no wiper fluid, no Gatorade.

The other profile is reality: In the backroom, where the employees eat lunch, the Democrats and their fat-cat donors are committing unspeakably sleazy and immoral acts.

Everyone on the left knows this. That's why, the moment Harvey Weinstein was exposed as a sexual predator, his reflexive response was not to apologize. Accused of the kind of rapes you'd usually need a gang to commit, he put up a virtue shield by attacking the National Rifle Association.

As we recently discovered, first with Weinstein and then with the Hillary campaign paying for the Russian dossier, the left has an all-new trick that exponentially multiplies the Democrats' sleaze factor.

It used to be that Democrats like Bill Clinton would deploy FOBs—Friends of Bill—like James Carville and Sidney Blumenthal to smear his victims. Now, they run their Watergate-style "ratf—ing" through law firms.

Ronan Farrow writes in this week's New Yorker [Harvey Weinstein’s Army of Spies] that Weinstein deployed a raft of spies to befriend and deceive his accusers in order to collect information that could be used against them. 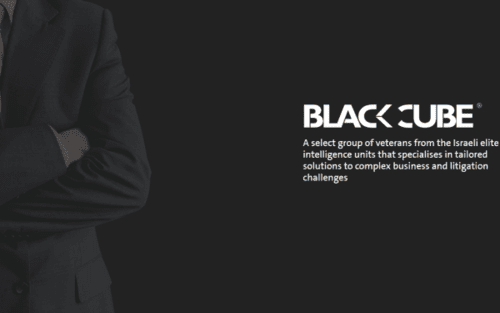 A spy with the Israeli private investigations firm Black Cube used a fake name and fake foundation to meet actress Rose McGowan. Then, pretending to be a deeply sympathetic women's rights advocate, the agent secretly tape-recorded the actress, hoping to get incriminating evidence against her.

At a minimum, this is unspeakably repellent and possibly illegal.

And who hired the spies? Not Weinstein! The law firm of David Boies, prominent Democratic attorney.

Using a law firm as a cut-out between the client—an alleged sexual predator—and the people stealthily recording his accusers has one very useful purpose: It places the spy agency's work behind the protection of attorney-client privilege.

Boies pretends to be steeped in the ethics of his profession, flying to California to argue against the "hate" of Proposition 8 and rushing to Florida after the 2000 election to defend Al Gore's rightful claim to the presidency.

But now we find out he's been harassing and intimidating a rape victim on behalf of his client (the rapist) with private eyes who lie about their identity and motives, wasting hours of the victim's time with false promises of support for her cause—a cause she has taken up precisely because of her alleged rape by the lawyer's client.

Whether or not this violates any bar association ethical canons, it's certainly despicable.

Two weeks ago, we found out that the law firm cut-out maneuver was the exact same technique used by Hillary's campaign to obtain damaging information on Donald Trump from the Kremlin—the infamous Russian dossier. The Clinton campaign and the Democratic National Committee shelled out $12 million seeking incriminating information on Trump from Russian government officials.

Just like Weinstein, the Democrats funneled money for a nefarious purpose through a law firm. To wit: The Democrats paid a law firm (Perkins Coie), which paid a private investigations firm (Fusion GPS), which in turn paid a spy (Christopher Steele), and Steele paid Russian government officials for dirt on Trump.

When the media found out that Donald Trump Jr. had taken a meeting with a friend of a friend, because she claimed to have incriminating information from Russia on Hillary, the word "treason" filled the airwaves.

MSNBC's favorite former Bush official, lunatic Richard Painter, said anyone who "wanted to help the Russians (disrupt our election process) engaged in treasonous conduct." Al Sharpton said that the willingness to accept "information to discredit your potential opponent in an American election from Russia—from what is supposed to be an enemy state"—raised the prospect of treason.

If that's "treason," then what is it when the Democrats reach out to the Russians and pass them money for dirt on Hillary's opponent in a presidential election? Wasn't that dossier an attempt to discredit her opponent and disrupt the election?

Remember: Don Jr. didn't seek a meeting with any Russians to get compromising information on Hillary, nor did he receive any. The Russian woman was using the pretense of having dirt on Hillary as a ruse to get a meeting, so that she could lobby Don Jr. on the Magnitsky Act.

Unlike Don Jr., the Democrats didn't wait to be asked! They paid $12 million, funneled through a law firm, seeking information on Trump from Russian government officials.

But we're not allowed to mention it because the Clinton campaign and DNC used Weinstein's money laundering technique.

The attorney-client privilege is intended to ensure that people are completely truthful with their attorneys. It is not supposed to be a shelter for any sordid, and possibly illegal, behavior by liberals.