Ann Coulter: Don't Primary Republicans —Unless They're For Amnesty! 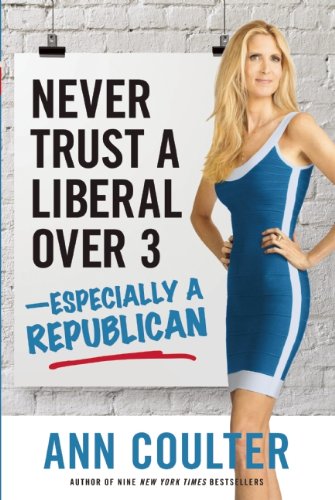 As those of you who follow my hate mail know, I am opposed to running untested candidates against perfectly good incumbent Republican senators this election cycle. It will be a long time before Republicans have as good a year as this to win a Senate majority.

Unfortunately, we have idiots doing the idiot thing, pretending to be "tea partiers," while challenging sitting Republican senators over fairly minor ideological differences.

Anyone opposing an incumbent Republican for any reason other than amnesty is a fraud or an idiot. Right now, immigration and Obamacare are the only things that matter. Since every Republican voted against Obamacare, that leaves only immigration.

Conservatives who ignore amnesty while carping about the debt ceiling, TARP (Troubled Asset Relief Program), the Internet tax bill or Benghazi are too stupid to help their country.

Suppose the Senate had passed a bill that would cut Texas out of the Union? Would that get your attention, fake tea partiers? Without Texas, Republicans would immediately lose 38 electoral votes, two senators and 24 members of Congress. (Democrats would lose only 12 House members.)

How would you rate the prospect of repealing Obamacare if Republicans could: never win another presidential election; never win another majority in the House; and never again win a Senate majority? Oh, and how does the expression "President Nancy Pelosi" grab you?

Would that bill be slightly more important to you than the Internet tax bill?

Well, guess what? Amnesty will produce the exact same result as losing the entire state of Texas. In fact, merely continuing our current immigration policies will achieve the same result; it will just take a little longer. (But wow, I'm sure glad we got "Octomom"! What a boon she's been  to our American way of life.)

The population of Texas is about 27 million. With amnestied illegal aliens allowed to bring in their cousins and brothers-in-law under our insane "family reunification" policies, the 12 million illegal immigrants already here will quickly balloon to 30 million new voters—who happen to break 8-to-2 for the Democrats.

Consequently, before running off and staging a primary fight against a sitting Republican, anyone who truly loved his country would ask himself the following three questions:

(1) Does the incumbent Republican support amnesty? And by the way, "Supports amnesty" includes anyone who says one of the following:

(2) Is a primary challenge unlikely to flip a Republican seat to the Democrats?

(3) Am I fairly certain the challenger is smart enough to avoid the (apparently) rocky shoals of being asked about abortion in the case of rape?

There are at least three Republican primary candidates who pass this test with flying colors. They're smart, attractive, articulate and unlikely to ever use the phrase "legitimate rape."

No incumbent Republican senators are in jeopardy—the one Senate race is for a seat currently held by a Democrat, and the other two races are for House seats in reasonably safe Republican districts.

Finally, all three races represent the battle at the heart of the Republican Party: Are we the party of soulless businessmen who care nothing about the country but only want higher profits for themselves? Or are we the party of middle-class and working-class Americans?

If you don't think the Republican Party should speak exclusively for Wall Street, Silicon Valley and the Chamber of Commerce, then you have to support:

State legislator Tillis championed a bill making it easier for North Carolina employers to hire foreign workers. Instead of temporary guest workers coming in for a few months a year to do farm work, Tillis' bill expanded "farm labor" to "all industries," and expanded "seasonal" to "nine months."

This wasn't an idle vote cast thoughtlessly: After the Republican governor vetoed Tillis' job-killing bill, Tillis led the legislature to override his veto.

Tillis has been well repaid by business interests. North Carolinians can repay him for driving down their wages on May 6.

Frank Roche, who is challenging two-term incumbent Renee Ellmers, speaks more knowledgeably about immigration than almost any sitting member of Congress. (After two decades in international banking in New York, he moved to North Carolina and became an economics professor and talk-radio host—so he can talk.)

Roche has this crazy idea that a nation's immigration policies should be good for the citizens of that country. (Somebody get this guy in leather restraints!)

By contrast, his opponent, Rep. Ellmers, has dedicated herself to supporting the needs of her rich donors by being strident, rude and utterly cliched on the subject of immigration.

Naturally, she is supported by Facebook billionaire Mark Zuckerberg—because who cares about the needs of North Carolina workers more than a Silicon Valley one-hit wonder seeking cheap foreign labor? (I'm sure Zuckerberg has the very best interests of the country at heart.)

Every exchange Ellmers has about immigration seems to end in a blizzard of shouts and insults. After failing to tear at the heartstrings of talk radio's Laura Ingraham with tales of rich farmers who need cheap foreign labor, Ellmers shouted that Ingraham was "ignorant" and "emotional."

About a week later, Ellmers denounced a constituent who criticized her on immigration, telling him that he didn't have "any damn facts" and was full of "hatred and vitriol."

(Zuckerberg apparently pays his politicians better than he pays his computer programmers.)

For the cherry on top, both Ellmers and Tillis go around claiming they're opposed to amnesty—while doing everything they can to sneak foreign workers into North Carolina.

So at least they know amnesty is not popular with voters. Here's an idea! Instead of running candidates who have to lie about their position on immigration, let's run Republicans who actually agree with the voters!

Sucking up to businessmen may have brought Tillis and Ellmers a lot of campaign cash, but it's unlikely to help them with North Carolina's population, which, by the way, is 22 percent black. Recall that Mitt Romney won an astounding 20 percent of the young black male vote by being the toughest presidential candidate on immigration in 50 years. (I guess they do want the jobs "Americans just won't do.")

Brat responded to Cantor's baby-talk, saying immigration "lowers wages, adds to unemployment, and the taxpayer pays the tab for any benefits to folks coming in."

Republicans aren't at much risk of losing any of these seats, with or without primary fights. But we'll lose them all within a decade if Republicans like Tillis, Ellmers and Cantor aren't stopped.

Brannon, Roche and Brat are the candidates true patriots should support with everything they have.

Ann  Coulter is the legal correspondent for Human Events and writes a popular syndicated column for Universal Press Syndicate. She is  the author of TEN New York Times bestsellers—collect them here.