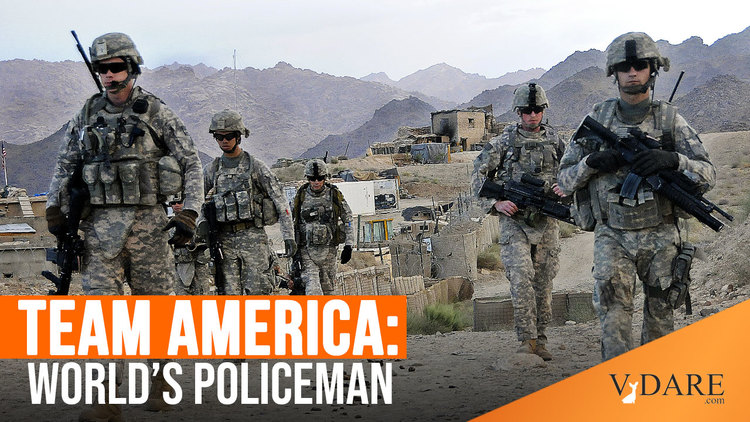 Why does the establishment think that whenever something is amiss anywhere in the world, we need to scramble jets and fly in to fix it?

There’s a girl in Sudan who can’t get treatment for a cut on her finger—but they will treat the boy! Fire up the missiles!

Naivete + hubris is a bad combination, like ignoring the label and mixing toilet drain cleaner and bleach.

For a thoughtful defense of Team America: World’s Policeman, we turn to the journal of consensus liberal opinion, The Atlantic. Peter Wehner, [Tweet him] a George W. Bush speechwriter and renowned cheerleader for flinging our troops around the globe to wipe out poverty, misogyny, homophobia, badness and meanness, recently penned a piece announcing that he is hopping mad at President Biden for ending the war in Afghanistan after a measly 20 years.

Wehner begins by sneering that Biden is “a follower more than a leader.” Biden’s decision to end the war is opposed by: Donald Trump, Tony Blair, Bush, The New York Times, The New York Post, Fox News, MSNBC, the “intelligence community,” the generals, etc., etc.

Then Wehner rolled out this huge exposé: As vice president, Biden “argued that the United States does not have an obligation to Afghans who trusted the United States,” telling Richard Holbrooke, “We don’t have to worry about that. We did it in Vietnam. Nixon and Kissinger got away with it.”

Biden also “reportedly pushed back on the argument that America had a moral obligation to women in Afghanistan.”

I’m seized with admiration for the man.

Writing in The Dispatch, Paul Miller [Email him] director for Afghanistan and Pakistan on the National Security Councils for Presidents George W. Bush and Barack Obama, listed the many, many accomplishments of our military hanging out in Afghanistan for two decades.

First, he says, “The U.S. mission in Afghanistan accomplished some important successes. There have been no large-scale international terrorist attacks emanating from Afghanistan or Pakistan since 2001.”

There have been almost “no large-scale international terrorist attacks” period. Maybe Madrid in 2004. The 9/11 attack was a once-in-a-lifetime sucker punch.

But you know what there have been? Loads and loads of “home-grown”—i.e. “immigrant”—terrorist attacks, such as, off the top of my head:

Speaking of home-grown, apple-cheeked, boy-next-door terrorists, who are the “Americans” still needing to be airlifted out of Afghanistan? Why can’t we have the names? The media want me to think they’re all Pat Tillman, but I have a sneaking suspicion they’re more in the mold of Omar Mir Seddique Mateen.

That’s true if “broadly” means “not at all.” Ninety-nine percent of Afghans say they want to live under Sharia law, according to 2013 polling by Pew.

And finally, for the killer argument, Miller says: “By virtually every metric of human development, Afghans are better off today than they were 20 years ago.”

Not to get bogged down in irrelevancies, but how about Americans? Are Americans better off today than they were 20 years ago?

The murder rate has soared, year over year, in each of the last two years; BLM riots caused billions of dollars in damage—and that’s just the amount covered by insurance; millions of illegal aliens are streaming into our country right now, as we speak, bringing disease and dysfunction with them; and criminals and homeless people control our streets—especially in any city lucky enough to have a George Soros-backed district attorney.

But who cares about our country? Let’s get back to Afghanistan!

Gen. H.R. McMaster, Trump’s national security adviser—one of his very first picks after winning the election by promising, among other things, to stop the permanent wars and get us out of Afghanistan—was on MSNBC last week, listing a parade of horribles that would flow from Biden’s decision to end the war Afghanistan.

(It’s a mystery why we didn’t get out under Trump!)

McMaster hysterically warned that the withdrawal will lead to another hostage crisis and televised mass executions: “We’re on fast-forward to 1979 in Tehran and a hostage crisis [when Iranian revolutionaries held 52 U.S. diplomats and citizens for 444 days] … Are we just going to stand on the sidelines and watch mass executions?”

I don’t like to make predictions, but McMaster has thrown down the gauntlet. I say: That won’t happen. There won’t be a Tehran-style hostage crisis or mass executions—at least nothing worse than our dear allies in Saudi Arabia do on a regular basis. Check back in a few weeks to see who’s right!

I will be right, because: 1) I’m already one week into being right; and 2) our generals are crazy. Remember when Fox News spent weeks promoting a general who said the missing Malaysian Flight 370 was hiding in Pakistan, waiting to be deployed in a future terrorist attack? (For a while, perhaps still, everything on Fox had to be about Islamic terrorism.)

Unfortunately, Trump thought surrounding himself with generals made him look macho, blithely unaware of who gets made a general these days, so we had to wait for Biden to keep Trump’s promise of bringing the troops home.

Out of either incompetence or malice—or both!—our generals have made a mess of the withdrawal. Obviously, the mistake made by Gen. Mark Milley, Biden’s chairman of the Joint Chiefs of Staff, was in not expanding the role of Ibram X. Kendi in advising our armed forces. Instead of seeking Kendi’s counsel merely on “white rage,” Milley should have gone to Kendi for advice on military logistics.