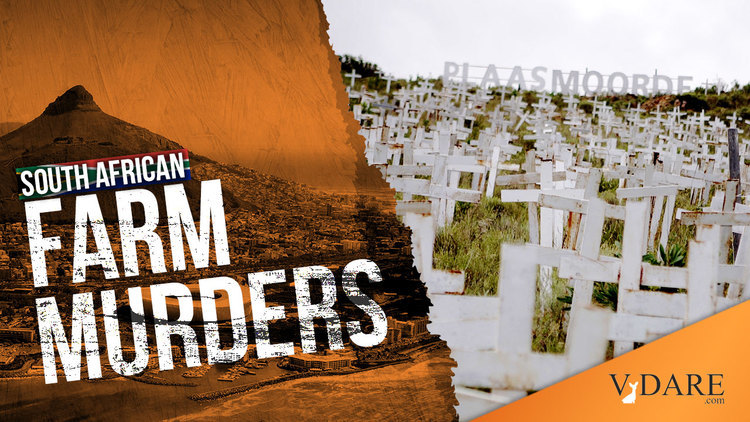 While Americans are worrying about the cruel fate of women in Afghanistan, black dictator Robert Mugabe is planning genocide in the country that Americans some 20 years ago helped push into its present crisis. Whatever President Bush does or doesn't do in the Middle East after the current war ends, he needs to do something in Zimbabwe now.

Those who read the back pages of the newspapers will know that for the last couple of years, Mr. Mugabe has been encouraging the murder of white farmers by roving gangs of black hooligans and the seizure of white farm lands by "squatters"—landless blacks who have decided they have a right to the land that whites "stole" from them and who have no earthly idea how to farm it or take care of it. The result has been not only the outright terrorization of the dwindling white minority in Zimbabwe but also the near-collapse of its agriculture, with famine looming in the near future.

Whites are not Mr. Mugabe's only target, however, even though he has muttered non-too-veiled threats of outright genocide against them. He also likes to terrorize black political opponents, and recently he was pushing legislation through parliament that effectively punished any criticism of the government. Zimbabwe's having an election in March, you see, and the new bill is part of the president's preparation for it.

President Bush has sent an envoy to warn the Zimbabwe government about the course it's on, and the House recently passed a bill that would offer Zimbabwe "incentives" if it backs away from repression. What exactly Mr. Bush's diplomat "warned" Mr. Mugabe with isn't clear. Bombing raids? International sanctions like those imposed by the United Nations and the United States on the white-controlled government that preceded Mr. Mugabe's regime? If Mr. Mugabe is willing to court famine and economic ruin to seize white lands, sanctions probably won't bother him much. What exactly is the United States willing to do to resist terrorism and genocide when the victims are whites?

A number of white farmers have already been murdered by government-backed black mobs when they resisted handing over their land; others have been beaten and had their crops and buildings burned, and some have simply fled—to neighboring Mozambique, where so far the government welcomes them (and where the Zimbabwe government is trying to stop them from going), and anywhere else that will let them in. As for the land they leave behind, the New York Times' description explains why they'd leave even if they weren't threatened with being murdered.

"Inflation in Zimbabwe is soaring, AIDS infection and unemployment are high and the country, once one of Africa's most self-sufficient, will need food aid for hundreds of thousands of people in coming months." [U.S. Warns Zimbabwe That Next Year's Election Must Be Fair NYT, Dec 12, (pay archive)]

The United States helped create the looming genocide in Zimbabwe in the 1960s and '70s, when presidents from Lyndon Johnson to Jimmy Carter enforced sanctions on the white government that declared its independence of Great Britain in 1965. In 1980, under President Carter, American diplomats sponsored and helped design the actual transition to what was quaintly called "majority rule" in Zimbabwe. Mr. Mugabe, the toast of the progressive set everywhere, has been president ever since. The United States therefore bears no small responsibility for what is happening in Zimbabwe and ought to do something to fix it.

Military invasion is probably neither possible nor desirable, but one measure we could and should take is simply to invite the persecuted whites of the country (and of South Africa) to immigrate to the United States. Instead of jabbering about amnesty for illegal Mexican aliens, instead of dredging up new hordes of refugees from Afghanistan, why not offer a homeland for people who really have something in common with America and who face destruction from a regime we helped create?

There are about 120,000 whites remaining in Zimbabwe and probably less than 6 million in South Africa, where similar problems of racial repression and terrorization  are appearing as the black-controlled government botches up what was once the most economically advanced country on the continent. Whites clearly have no future in either country today, and it's not clear that the countries do either.

Since the United States loves to boast of how it's a "nation of immigrants" and lays out the welcome mat for everybody, wouldn't it make sense to announce that whites who flee the repression we helped create would be especially welcome here? Wouldn't it even make sense for the U.S. government to offer to subsidize white emigration from Zimbabwe and South Africa? And wouldn't it be nice, for a change, to have some immigrants who actually resemble—culturally and linguistically as well as racially—the people whose country they come to join?