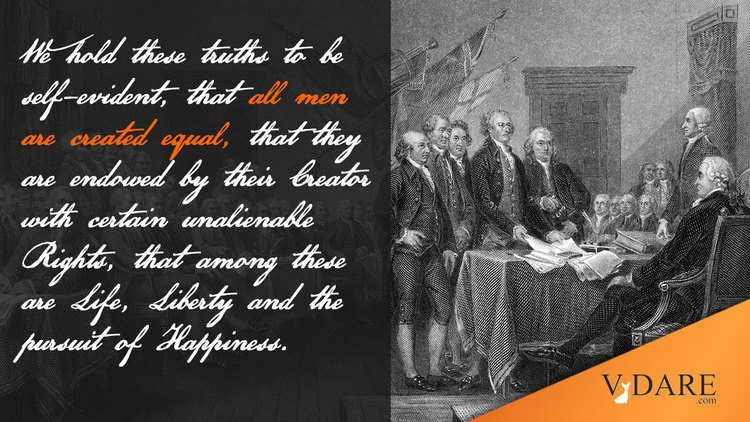 America and the Left Half of the Bell Curve Part III: IQ and the Class Struggle

Steve Sailer writes: At long, long last, I'm back with the last three sections of my survey of the moral and policy implications of the latest research on human intelligence. I've tried hard to make this easier to read than it has been for me to write. Writing about IQ differences has always proven time-consuming, because the ramifications are endless.

Further, I'm writing something that as far as I know no one has ever attempted before. When The Bell Curve hit the bestseller lists, a handful of the more perceptive reviewers mentioned that the highly heritable nature of IQ does not logically absolve people who were born acute of some responsibility for the fate of people born obtuse. Yet few have pursued this line of argument until now.

Part I: IQ and Why We're Afraid to Talk About It

Part II: How the Other Half Lives

Two articles posted on Salon.com (August 9, 2000) nicely illustrated the hopelessly contradictory conventional wisdom about IQ. The first routinely denounced IQ tests, claiming they tried to measure the meaningless. [“The Making of Intelligence” by Ken Richardson, By Christine Kenneally, August 9, 2000] The second routinely denounced Texas (and of course its Governor) for executing a confessed murderer-rapist named Oliver Cruz. Why? Because he once scored 64 on one of those "meaningless" IQ tests! [Too slow for death row?  By Alicia Montgomery, August 9, 2000]

This shamelessness is rampant in the mainstream media. The New York Times' editorialists are perfectly capable of excoriating the very concept of intelligence one week - and then thundering the next week that lead paint can lower children's IQs by five points.

And yet it's rapidly reaching the end of its rope, as genetic investigators push ahead. On August 8th, the BBC reported:

"U.S. researchers believe they have identified the parts of the human genome involved in developing a person's intelligence. This means scientists could soon test the potential intelligence of newborn babies... The researchers, working for the US National Institutes of Health, analyzed the DNA of 200 of the brightest kids in America and compared them with the genetic material from ordinary children. The results are due out next year, but the BBC Newsnight program has learned that key differences have been found. In other words, the scientists are homing in on the genes for genius. The team believes more than one gene is involved - and that these genes can make a big difference to a person's intelligence. The research was led by Professor Robert Plomin.[ Genius of genes, By BBC science correspondent Pallab Ghosh]

This news report should come as no surprise. Dr. Plomin has been hard at work on finding the various genes that influence intelligence for years. More fundamentally, that there are variable genes that impact intelligence should be obvious to anyone with more than one child. Something besides upbringing makes siblings turn out so different. Indeed, Thomas Bouchard's famous Minnesota Twins study settled the question once and for all in 1990 by confirming earlier studies showing that identical twins raised in separate families are more similar than fraternal twins raised side-by-side.

But when Plomin (or somebody else) starts isolating the exact genes that cause differences in intelligence, the end will be very near for the Age of Denial.

What then? The American experiment rests in part upon the idea "that all men are created equal," in "that they are endowed by their Creator with certain unalienable Rights, that among these are Life, Liberty and the pursuit of Happiness." Since WWII, however, any emphasis on the spiritual, moral, and legal equality of humans has been shoved aside by the highly risky assertion that we're all empirically equal. This presumption has served many clever people well. Sneering at The Bell Curve enables you to ignore just how lucky you were to have been born out on the right tail of the bell curve.

Since factual equality has become the new public shibboleth (not that anybody believes it in private), the professional leaders of organized pressure groups can blame racism, sexism, ableism, etc. for their groups' failure to achieve economic equality. Since everybody assumes equal opportunity guarantees equal results, activists can logically demand affirmative action jobs for people such as, well, such as themselves.

Likewise, the public assumption that all men are created empirically equal allows the business elites to assuage their consciences - on those rare instances when they actually think about the struggles of blue-collar workers. The assumption lets Stanford MBAs blame growing economic inequality on the laziness of the lower orders, although the scientifically accurate response would be "There but for the grace of God go I."

But the death of the empirical equality fantasy logically impels us toward thinking hard about our moral obligations to those less fortunate in the genetic lottery.

We can start by asking: Whatever happened to the Class Struggle? It's not as if earning a decent living suddenly stopped being a struggle for working class families. "Holding buying power constant, the average hourly earnings of production and non-supervisory workers in the U.S. economy fell 9 percent from $14.09 in 1973, to $12.77 in 1998." [AFL-CIO] And their net worth has plummeted relative to white-collar workers with stock options and big portfolios.

But the attention paid to this once-dominant topic has dwindled almost completely. Why? They say, "History is written by victors." What they don't tell you is that "Journalism is written by the high scorers on the SAT-Verbal." (As are screenplays, political oratory, and TV commercials.) In our increasingly stratified society, the reality of life on the left half of the IQ bell curve is more and more invisible to the media elite.

A big problem for modern class warriors like Pat Buchanan on the right   or Jim Hightower on the left  is that over the years the number of blue collar workers with the verbal talent needed to articulate their class interests has plummeted. Where'd the smart ones go? To college and then into white-collar jobs. In the past, unions and other working class institutions had leaders and spokesmen who were both highly intelligent and authentically representative of the rank and file (i.e., not you, John Sweeney of the AFL-CIO).

In previous eras, many routes to success didn't go through college. These days, though, only supersmart technogeeks like Steve Jobs, Bill Gates, or Michael Dell believe they can afford to blow off college in favor of work. At present, two-thirds of high school girls give college a try.

Far fewer graduate, of course, since probably no more than half of that horde have the native wit to get much out of a genuine higher education. But while they dither around before dropping out, they are providing plenty of campus jobs for professors, counselors, diversity sensitivity consultants, and the like. Today, even among siblings brought up in the same household, a kid in the top quartile of the population intellectually is 28 times more likely to obtain a college degree than his or her brother or sister in the bottom quartile. Charles Murray's clever study of 710 pairs of siblings raised together found that "while 56% of the bright [the top quartile with IQs over 110] obtained university degrees, this was achieved by only 21% of the normals [the middle half with IQs from 90 to 110] and a minuscule 2% of the dulls [the bottom quartile with IQ under 90]." [IQ Will Put You In Your Place, Charles Murray, London Sunday Times, May 25 1997.]

Why do parents spend $130,000 to send their heirs to elite private colleges? Assume Junior will not study science or engineering (in which fields, I must admit, highly valuable instruction still takes place). Then the main purpose of getting him into a college with a high average SAT score is not to educate him but to mark him as a lifetime member of the IQ Overclass. Corporate recruiters, largely banned from using IQ tests themselves since the Supreme Court's 1972 Griggs decision, use a college's average SAT score as a proxy for a job applicant's IQ. A second purpose: to nudge kids toward marrying somebody with a high score, who thus has a major earning potential.

Hence the decline in class conflict - and the rise in ethnic conflict. Ditch diggers, for instance, no longer have any articulate spokesmen. In fact, each year, due to assortative mating (e.g., Yale students are more likely to marry other Yale students than to marry chicken-pluckers), there are a few less high-IQ young people born into blue-collar families. By contrast, every racial group has at least some verbally facile intellectualoids to fill the role of Aggrieved Professional Ethnic.

This growing IQ gap causes all sorts of problems for an extremely high IQ intellectual like Buchanan. His motto seems to be "I'd rather be Provocative than President." He enjoys coming up with new ideas rather than repeating the same handful of old chestnuts over and over again, as professional politicians must. This makes his ability to connect with his target audience distinctly erratic. For example, he launched his current Presidential bid with the curious stratagem of publishing a book deriding American involvement in WWII. While an interesting historical argument, it was not a move focus-tested for its appeal to highly patriotic folk.

But the role Buchanan is trying to fill may eventually be assumed by somebody more naturally suited to it. Successful football coaches are very good at boiling down the complex game plans invented by their high-IQ offensive coordinators and pounding them into the skulls of guys with necks wider than their heads. Former U. of Colorado coach Bill McCartney has had an enormous impact by founding Promise Keepers. These skills could well prove useful in politics.

In my next article, I'll review alternative strategies for helping the left half of the Bell Curve help themselves.