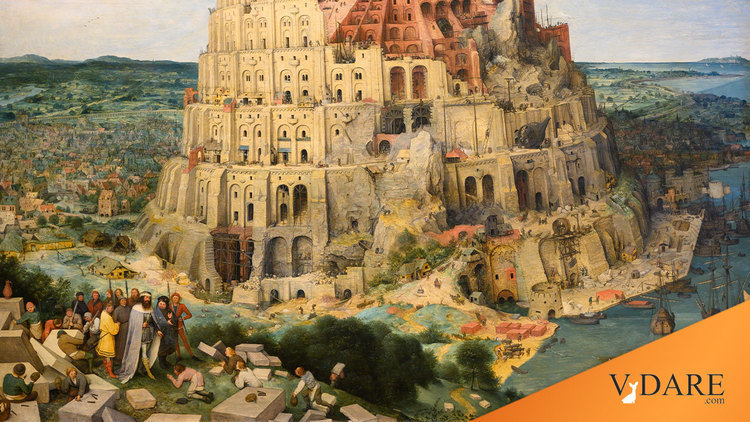 Abolishing America, Not Continued; Official English Will Send A Message

It probably occurs to very few Americans that when they visit an ATM machine or put together some gadget bought at K-Mart or Wal-Mart, they are witnessing the cultural disintegration of their own country. The reason is that ATM machines and the assembly instructions for most mass-marketed products now come in at least two, maybe more, languages. Ten or twenty years ago, that wasn't so. Back then, there was only English—because back then there were only Americans.

Today, thanks to the mass immigration of the last three decades, there are plenty of non-Americans here and therefore plenty of non-English languages—raising the interesting prospect that some day you may have to wade through assembly instructions several hundred pages in length. The 2000 Census found that the percentage of "Americans" speaking a foreign language at home had increased in the last decade from 13.8 percent in 1990 to 17.6 percent in 2000—close to one-fifth of the nation. The Census also reported that there are now 329 different languages spoken in the United States.

The linguistic Tower of Babel that the Open Borders lobby has built is the logical consequence of the immigration invasion. When there are millions of immigrants, they form distinct communities in which assimilation to American habits, including the American language, is at least unnecessary and may even be counter-productive. It is difficult if not impossible to maintain a national unity of any kind, political or cultural, if a common language does not exist as a means of communication and also simply as a protective umbrella that covers the whole population.

Hence, a good many people advocate making the English language the official language of the country. One such advocate is Rep. Steve King of Iowa, who has introduced a bill in Congress to do just that. If passed, it would require that "all laws, public proceedings, regulations, publications, orders, actions, programs and policies" be conducted in English, with some appropriate exceptions to protect public health, national security, commerce, etc.

So far the bill has the support of 75 co-sponsors and of one of the main organizations pushing the concept of an "official language," U.S. English. The chairman of the group, Mauro Mujica, says, "With so much diversity, we need something that can spread unity"—a noble sentiment.

I have some problems with the concept of the federal government imposing cultural unity. The culture that binds a nation together is supposed to come from the society itself, not the central state, but it's now clear that the central state, through its refusal to control the mass immigration its own laws and policies (and non-policies) created, is seeking to impose a cultural unity radically different from the authentic American one. Mr. King's bill, if nothing else, will challenge that act of imposition (really an act of revolution) and commit the government to protecting the real civilization of the nation and the language that helps bind it together.

Just how serious is the threat of linguistic (and therefore cultural and therefore political) anarchy? Mr. Mujica, himself an immigrant from Chile, notes that the New York Times reports that in the city of Hartford, Connecticut, where the population is now 40 percent Hispanic, "half of Hartford's business owners do not speak English." As the Times itself reported, a local baker (himself Hispanic) says, "In the bank, they speak Spanish; at the hospital, they speak Spanish; my bakery suppliers are starting to speak Spanish. Even at the post office, they are Americans, but they speak Spanish." The Census Bureau reports that almost half the city's Hispanic population speaks English "less than very well." The official web page for the city is bilingual and a phone call to the mayor's office after the close of business receives an answer in Spanish. The mayor, Eddie Perez, says, "We've become a Latin city, so to speak. It's a sign of things to come." You bet. This is Connecticut we're talking about, not El Paso.

The obvious solution to the Babelization of America is to stop immigration now, send back the illegals, take a hard look at least some "legals" and cleanse the culture of the Open Borders lobby and its lies and foolishness. Unfortunately that won't happen this week. In the meantime, the best recourse is to support Mr. King's legislation.

If there's any real problem with the King bill, it is that some will imagine that making English the nationally official language will solve the problem of national disintegration. It won't, but it may send a signal that many Americans and most lawmakers are not in favor of disintegration. There haven't been too many such signals in recent years. It's more than time for the real America to send one and for its elected leaders to pay attention.